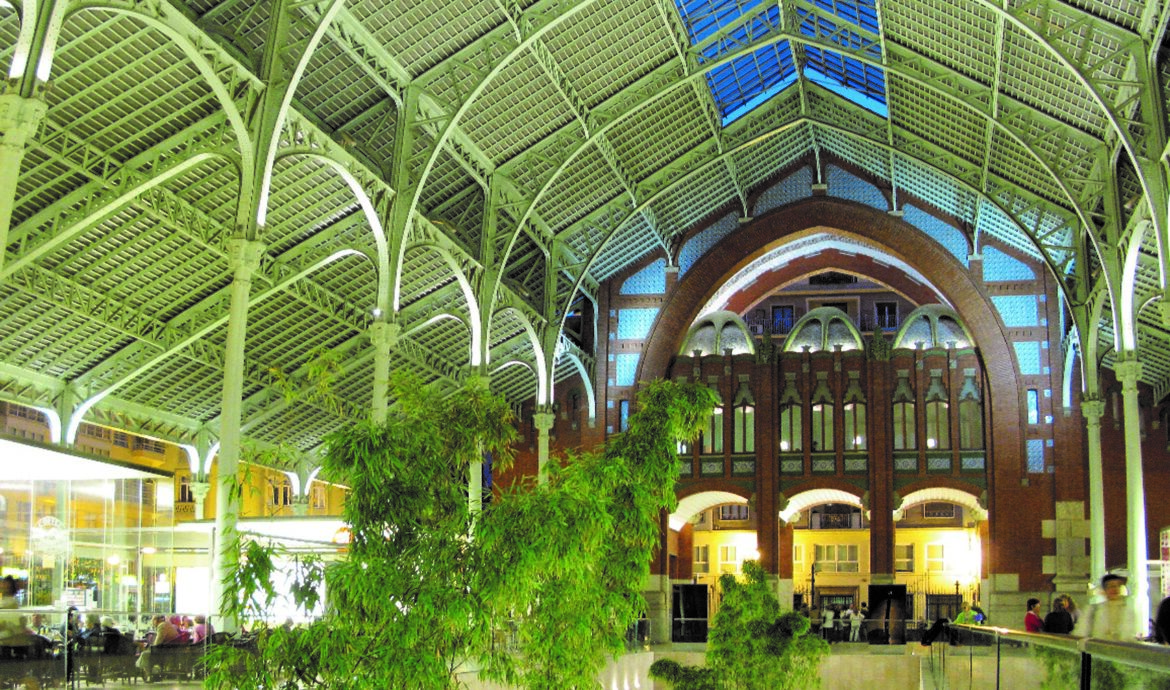 The Colón area of Valencia

Surrounded by Inditex’s brands of Zara, Bershka, H&M. Along with the Apple Store, The Corte Inglés, and the German high street goliath Media Markt, the Mercado de Colon is a historical jewel that sits proud and beautiful amid a sea of modern commerce, which has also taken its toll on the market itself. As we’ll find out.

The market was originally built due to complaints by the local (wealthier) people of the area, who wanted a local market to prevent having to speak to [uncouth] street traders or having to walk all the way to Russafa for their daily produce. The project put forward by Mora in 1913 was more than just a solution, it was an architectural artwork that would use (for the time) modern materials and intricate ironwork to reflect the artisans and stall owners tending their wares below. The market was opened amid huge fanfare. A procession took place marching from the bullring in the centre to the new market.

If you come to Valencia to shop, you’ll likely find yourself on Calle Colón right in the heart of the city on the busiest high street district looking at clean new sneakers and luxury leather handbags…

For the Mercado de Colón, is located in the busiest district of Valencia had a negative effect, as fashion brands came along and opened their dazzling, sparkly new shops, house prices went up, and the whole area became very expensive to live in.

For the market tradespeople, the change of the neighbourhood was gradual, but the new, modern look of the Colón area slowly took its toll on business, and over time the market traders either lost interest or were unable to carry on working, many retired.

From the 60’s through to the 90’s, the market itself had become known for its disrepair, and local people would rather go to the Central Market than risk illness from the smelly Mercado de Colón.

So in 2003, a complete renovation of the market was proposed, which would change the face of the place both inside and out.

The renovation work was not easy. Over many years, blocked drains had worn into the metalwork, the ceramics were hidden under years of limescale, and new foundations were needed. The whole project would cost over €33,000,000, the details of the renovation plans put forward in 2000 are published here. The ironwork was taken down and each joint repaired, by-hand, individually. Careful cleaning of the brickwork was required to restore its original look without damaging the surfaces.

The renovation and its huge cost were met with some criticism at the time, so close to the city mayoral elections, many people smelled a rat. Many people felt that the character of the market would be completely lost. The new Mercado would feature coffee shops, florists, wineries and clothes shops. According to Josep Vincent Bergon:

The pessimism is understandable. Many of the markets in Valencia continue as they have for the last hundred years, selling meat, vegetables and fish, it’s actually surprising that the Central Market building hasn’t been bought out by a high-street megalith like Inditex. But looking on the brighter side, some people were in favour, Luis Pablo del Río:

“Our market resurfaces with new air, the benchmark of the neighbourhood where our Falla is located opens its doors again.”

Either way, the market is now open and thriving, with tourism to Valencia rising year on year, many people visit the market, and though not serving its traditional function, it is still an important addition to the city and an architectural focal point.

Architecture inspired by Gaudi and co.

You would be forgiven for thinking you were looking at a famous building in Barcelona. But no, the Mercado de Colón de Valencia was first proposed in 1913 by the architect Francisco Mora. Mora was originally from Sagunto in the north of Valencia, he studied in Catalunya at the Barcelona School of Architecture, giving him a very strong education in the works of  Gaudí, Puig i Cadafalch and Doménech i Montaner, which is immediately visible in the façade of the market.

For those of you interested in Spanish architecture, particularly the famous buildings of Barcelona, the Mercado de Colón is an architectural treat, incorporating all of the features of Catalan architecture, buried in the bustling streets of the Colón district of Valencia. As you can see, the Venetian wrought iron structure is a direct descendant of none other than the Sagrada Familia.

The streets around the Colón area are swanky. The market itself is now, for want of a better word, posher. There are fewer cars (thanks to the underground car park), and there are new upmarket boutiques selling artisan fashion made locally. So if you’re coming to Valencia in search of some good shopping, the Mercado de Colón is a great place to visit.

If you’d like any more information on Valencia before you come, contact us and we’ll help you out here.