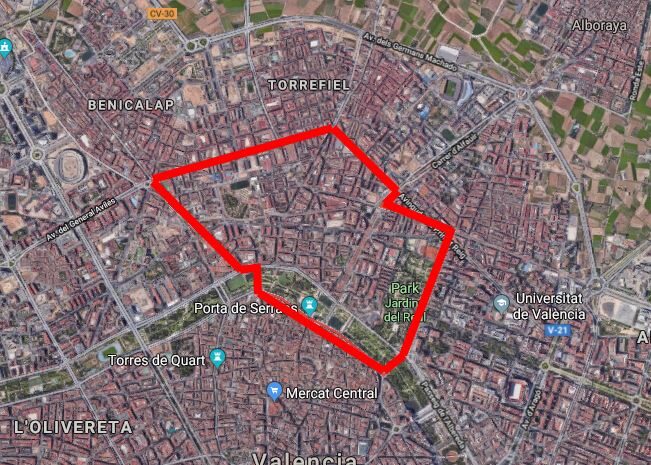 Ever thought about moving to Valencia but don’t want to tread the beaten path? If you ask locals about the best neighbourhoods in Valencia, they will answer Russafa, El Carmen or El Cabanyal. But Valencia has so much more in store for you. What are the best places to invest in and what do they have to offer? La Zaidia for example. You read it here.

Just outside the old city walls, La Zaïdia is a melting pot of past and present. The apartments in this emerging neighborhood just north of the Turia river bed and the historic centre are often larger and more affordable than in the so-called trendy neighborhoods. Worth a look.

The name Zaidía is the Spanish version of the original Valencian name Saïdia. The name comes from the palace of the Andalusian king Zaid, where the monastery Covento de Gratia Dei was later built. La Zaidía developed outside the city walls, but gradually gained popularity and has taken on an increasingly prominent role in the social and economic life of the city of Valencia.

The district consists of five neighborhoods: Morvedre, San Antoni, Tormos, Trinitat and Marchalenes. In the north, La Zaïdia borders with Benicalap and Rascaña, in the East with Benimaclet and el Pla del Real. To the west we find Campanar and if we look to the south, we see Ciutat Vella. When you stroll over the bridge Pont de Fusta, you walk straight on the Torres de Serrano. So La Zaïdia is very close to the historic center and the Turia gardens.

One of the biggest attractions of La Zaidía are the large green areas. In their free time, locals go to the municipal parks such as the Jardines del Real or the Marchalenes city park. The old Turia river bed serves as the southern border of the district.

Right next to the Turia gardens we find the emblematic train station that celebrated its 125th anniversary in 2017, and has been in use as a police station since 1995. Today trains don’t run anymore, but behind the station there’s an excellent connection with the beach from the Pont de Fusta tram station, situated behind the police station.
This district also features other remarkable buildings such as El Convento de la Trinidad and the Museum of Fine Arts.

For your portion of modern art and culture, Bombas Gens is the place to be, an art centre in an old factory built in the 1930s in geometric Art Deco style.

La Zaïdia is very pleasant to live in. Despite the approximately 50,000 inhabitants in this residential district, it is rarely too busy or too loud. This rather quiet district has plenty of supermarkets, cafes, restaurants and other facilities. Except for some hidden gems you will barely find charming houses with traditional facades, as the apartment blocks from the sixties and seventies are predominant in the townscape.

La Zaïdia has a wide variety to choose from when it comes to gastronomy and entertainment. For la cocina de la abuela and dishes made with local products, you need to be at Sra. Cook. In Restaurante Taplà you enjoy the best burgers of La Zaïdia and in the same street, the Avinguda de la Constitució, you choose from the different rice dishes that Bar Restaurante Nou Barcelona has to offer.

If you prefer something special, Sondelluna is a must. In this restaurant you enjoy an amusing show while you are being served. The food is tasty and the atmosphere is entertaining.

In the heart of Marchalenes you can paint the town red at Deseo 54, Valencia’s biggest gay club.

And if you are up for something different, you just have to cross the bridge towards Ciutat Vella, where you will find yourself surrounded by restaurants and bars.

The rising prices and scarcity of supply in the traditional trendy areas forces us to look elsewhere for quality at the right price. We find that combination in La Zaïdia. The neighborhood is characterized by high-rise buildings and new projects such as the Pont de Fusta residence.

According to the latest figures from Trovimap, the price per square meter in Valencia in December 2018 was € 1,849. The average price in La Zaïdia in the same period was 1,542 € per square meter. That is a lot below average, nonetheless no less than 12 percent more than the year before. Especially the districts Marchalenes (+ 19%) and Tormos (+ 16%) contribute to this striking and in our opinion justified increase.

Real estate prices in La Zaïdia are (still) reasonable, although things are moving fast. Be quick.

Do you want to know more about La Zaïdia in Valencia, or investing in Valencia in general? Contact us here, or send us an email ([email protected]). Also, visit Globexs.com for interesting rentals in Valencia.