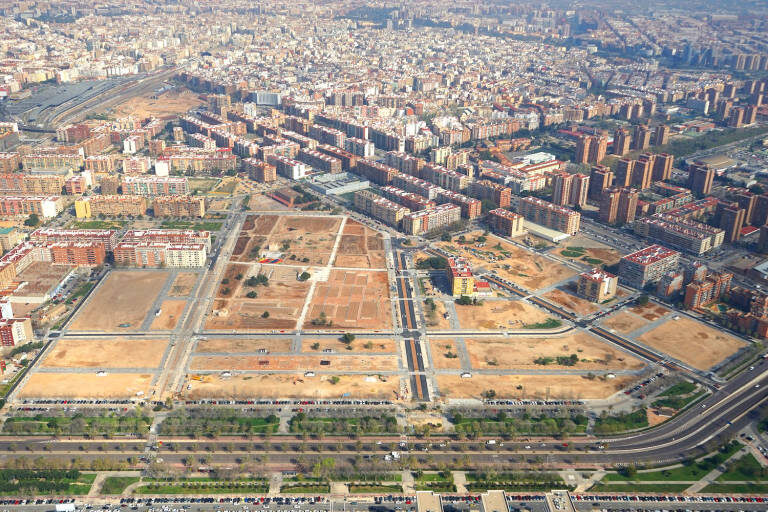 Ever thought about moving to Valencia but don’t want to tread the beaten path? If you ask locals about the best neighbourhoods in Valencia, they will answer Russafa, El Carmen or El Cabanyal. But Valencia has so much more in store for you. What are the best places to invest in and what do they have to offer? Malilla Valencia for example. You read it here.

Malilla Valencia of all places

Malilla, or all places. What could possibly be worth mentioning about this drowsy part on the outskirts of Valencia? Well, for starters that there are many building projects in the pipeline. And that Malilla is one of the seven districts of the Quatre Carreres district. Discover more in this article.

In the Andalusian era, in 1238, the king of Aragon Jaume I donated farmland near Ruzafa to castellan Pedro de Fontoba. This collection of farms was named Carrera de Malilla. In 1877, Malilla became part of Valencia together with the entire territory of Ruzafa.

The neighborhood is part of the Quatre Carreres district and is located south of the city. Malilla borders Ruzafa to the north, Fuente San Luis and La Punta to the east, Horno de Alcedo to the south and Cami Real and La Creu Corberta to the east.

Malilla can roughly be divided into two parts. The northern part is packed with apartments and new projects. The southern area between the Hospital de La Fe and the ring road V-30 is mainly agricultural and vegetable garden area. Here you can still find so-called alquerias: old farms.

Despite the limited size (2.507 km²) of this relatively new district, in 2017 it had a population of 22,026 and a density of 8,786 inhabitants per square kilometre according to the official figures. The northern part is rather densely populated thanks to the high number of apartment blocks, while the extreme south is (still) almost uninhabited.

It is only with the opening of the Parque Central by the end of 2018 that the district carefully stepped out of the shadows. The park to the north of Malilla brings a lot of green to a neighborhood that is mainly characterized by its residential character.

Although it is not technically part of Malilla, the long-awaited Parque Central (11 hectares) provides an increased attraction for the neighborhood. The plans for the park have been around for decades, and after years of impatience, the doors finally opened at the end of 2018. The entire project will occupy a total of 23 hectares. To make this possible, the train tracks will be relocated below ground. But given the high cost and the size of this project, part 2 of the park is years away from being realized.

Forget about Valencia C.F. and Levante U.D. The local football club in this neighborhood is Deportivo Malilla. And although the stadium of Valencia Basket Club is just a stone’s throw away from Malilla, the neighborhood has its own basketball club with Club Baloncesto Malilla.

For a wide selection of typical rice dishes, such as Valencian paella and black rice, we recommend Restaurante la Zarandona. But also try their tuna tartare. La Galería de los Arroces is also a must.

Malilla has a good connection with the inner ring (V-31) south of Valencia and with the Avenida de Peris y Valero and Avenida Ausiàs March. The neighborhood is served by bus lines 6, 8 and 18, and the N7 of the EMT.
The construction of a metro station and the future Central Station of Valencia, is a work in progress.

Today’s expansion of Valencia is clearly visible in Quatre Carreres but more specifically in Malilla. Until recently, there were a lot of empty plots in the neighborhood, but investment companies and developers are transforming the entire southern strip of Quatre Carreres into a large construction site.

For example, the German investment company Aquila Capital is planning to build 1,300 apartments in the unexplored area just south of Hospital La Fe. So drastic that one speaks of an entirely new neighborhood.

The statistics from Tinsa, the leading valuation and consultancy firm in Spain, show that the price per square meter amounts to € 1,258 in Quatre Carreres in the fourth quarter of 2018. This is an increase of 6.4% in comparison with the same period the year before. However, this increase is limited compared to other districts.

Trovimap specifically looks at Malilla. The average price per square meter in Malilla in December 2018 was € 1,447, which is 21.75% lower than the average for Valencia. This makes Malilla number 54 on 87 in the list of most expensive neighborhoods in Valencia.

We can cautiously conclude from these figures that Malilla has a limited attraction and does not get the attention it deserves. As far as we are concerned, this is a matter of ‘unknown unloved’.

Do you want to know more about Malilla Valencia, or investing in Valencia in general? Contact us here, or send us an email ([email protected]). Also, visit Globexs.com for interesting rentals in Valencia.