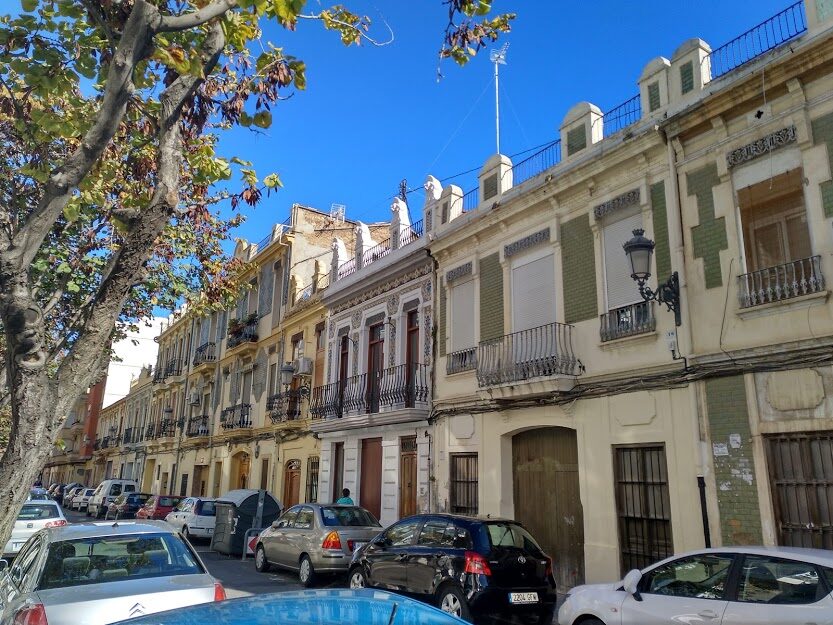 Ever thought about moving to Valencia but don’t want to tread the beaten path? If you ask locals about the best neighborhoods, they will answer Russafa, El Carmen or El Cabanyal. But Valencia has so much more in store for you. What are the best places to invest in and what do they have to offer? You read it here.

Ayora, not to be confused with the municipality to the southwest of Valencia, is one of the many upgraded neighborhoods in the city of Valencia. Families and students live hand in hand in this residential area between the city and the beach. Discover Ayora here.

The neighborhood is named after the Palace of Ayora, built in 1900 by order of the rich merchant José Ayora.

Ayora is part of the district Camins al Grau and is situated in the east of the city. To the north the neighborhood is bordered with Illa Perduda and Ciutat Jardí, to the east with Cabañal-Cañamelar, to the south with La Creu del Grau and Camí Fondo and to the west with Albors.

Ayora is a residential neighborhood where mainly Valencian families and students live. The apartment buildings are generally not very high and the streets are quite narrow and straight. However, the borders are wider, busier avenues with higher buildings such as the Avenida de Puerto, Calle de Serreria and Calle Dr. Manuel Candela. The atmosphere is calm, both during the day and at night.

After school you can spot the soul of the neighborhood at the Plaza Francisco Javier Goerlich Lleó where parents and grandparents enjoy a beer or a coffee while they keep an eye on their little rugrats horsing around on the playground.

The Palace of Ayora

The Palace of Ayora is one of our favorite hidden gems in Valencia. It was designed in an eclectic and modernist style by architect Pelegrín Mustieles Cano. Originally built as a luxurious villa for the merchant José Ayora, it served as a discotheque in the seventies and even has been a nursery for a while. Today, the palace houses university aulas.

The lungs of the neighborhood are the gardens of Ayora. This 17,000 square meter park contains 40 different types of vegetation. During the hot summer months, you’ll thank the shade of the luscious trees and plants while having a rest on the ceramic benches.

The park is characterized by the large variety of both native and exotic plant species, giving it a botanical garden character.

Every city has parts that are less attractive due to lack of infrastructure or socio-economic circumstances. Part of Ayora underwent a development process that has upgraded the whole district. For the urbanization project PAI, 60 houses had to make way for 165 new homes and a green zone with playground.

In Ayora you will find mostly average priced meals of national and international cuisine. Meson Las Espigas is worth a visit if you like the more refined Spanish cuisine. And who doesn’t? If you don’t have time for an extensive dinner, El Pollo Criollo is the place to be. As the name suggests, their specialty is chicken but they also provide other take away dishes. The best coffee and pastry are served in Portobello on Avenida de Puerto.

Fill your grocery bag in the numerous supermarkets and smaller local shops where they also offer international and ecological products. It seems that every street has its own fruit shop and the Mercado de Algirós and the Mercado del Cabañal are nearby.

Not beach ready yet? Then get your fit on in one of the numerous gyms. Many sports enthusiasts also go running at the beach. Or go to one of the places of interest in Ayora: the popular public swimming pool just next to the Garden.

Ayora has an excellent bus-tram and metro connection with the rest of the city. From the metro station Ayora (lines 5 and 7) and the metro-tram station Marítim-Serrería (lines 5, 7, 6 and 9) you’re only ten minutes away from the city centre. The beach is just a fifteen minutes’ walk. Also, Valenbisi, the city’s bikes, are a quick and inexpensive way to get around. Are there any disadvantages? Hell yes. We challenge you to find a parking space in Ayora.

Let’s have a look at the property prices in Ayora. The average price per square meter in Ayora in January 2019 was € 1,735. This is 7.11% lower than the average in Valencia.

If you are looking for an apartment in Valencia, what are you waiting for? Leave the beaten path and discover Ayora. Beautiful apartments, for all tastes and budgets, in a unique neighborhood.

Do you want to know more about Ayora in Valencia, or investing in Valencia in general? Contact us here, or send us an email ([email protected]). Also, visit Globexs.com for interesting rentals in Valencia.